It’s official… Formigine di Modena is a land of Balsamic Vinegar. We find it written on the sign at the entrance to the city! The goal is to identify with this sign the 22 municipalities of the province that host a Municipal Acetaia. However, Formigine arrived first!

Starting on the 11th of February, Formigine di Modena is Land of Balsamic. With just over 35,000 citizens, the Municipality has crossed the finish line. It is the first in the province of Modena to have obtained the sign that warns passers-by that it is entering into the “Land of Balsamic Vinegar”.

The Mayor of Formigine says: “There is a great culture of Balsamic in our territory. Every year there are many people from Formigine who participate and are awarded in the Palio di San Giovanni. We thank Consortia for the launch of this project. We hope will become a driving force for the whole province of Modena in the months of the restart after the pandemic ”.

The Consortia of Balsamic Traditional of Spilamberto (Modena) launched the initiative of the sign. The aim is to expand the “Land of Balsamic Vinegar” to the 22 Municipalities in the province of Modena that host their own Municipal Acetaia. In this regard, the Grand Master Fini affirms: “Finally we are beginning to understand the cultural value of this treasure. It has been in our hands for centuries!”. In fact, putting up such a number of signs on the doors of the municipalities would be a great goal for Balsamic Vinegar! 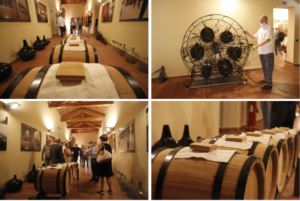 Kept in Villa Benvenuti. The Formigine Municipal Acetaia was born about 50 years ago. The master Giorgio Ferrari has directed it since 1994. The Acetaia is named after “Francesco Aggazzotti”, the first mayor of Formigine.

It is curious to mention this fact. The product specification for the protected designation of origin of Traditional Balsamic Vinegar was obtained from one of his letters. This is dated 1862.  (We also talked about it here).

Two batteries make up the Acetaia di Formigine. Five barrels each, plus a mother barrel and is now at a crucial point: the last formal step is missing to obtain eligibility for the P.D.O. (Protected Designation of Origin).

Of the 22 municipal vinegar factories in the province of Modena, 14 have already obtained this recognition. Together with Formigine, in addition, Castelvetro, Camposanto and the Acetaia Ducale of Modena (at the Academy) will soon obtain it.

The Grand Master Fini says: “I have to thank the administration of Formigine and those of all the other Municipalities. Through the Municipal Acetaie they have been able to give voice and substance to our tradition. They projecting it into the future where the younger generations will be able to touch it with their hands and feel between the scents and suggestions of barrels all the modenness of a unique product in the world”.

In conclusion, Modenesi, we can only be proud to be part of the “Land of Balsamic Vinegar”.