The original traditional vinegar of Modena is defined with the adjective “balsamic” because in the past it was thought to have medical properties. It was, in fact, used as antiseptic for sore throat and as a digestive to prevent stomach upset. Always in the past it was believed that among the charitable virtues of black gold in Emilia Romagna, it was also good to prevent the plague.

Tradition means that batteries (production units consisting of at least five barrels of different woods ranging from 60 to 15/20 liters) would be kept in the enclosures of the houses to avoid theft. One of the oldest battery differs from the current one because it has so-called “ears”, ie handles made with the same wood of the barrel. These were used to move the barrels before the machinery was introduced.

It is a modenese custom to use a local Panaro river stone to keep the punch that protects the barrel opening. It is said that without this particular stone the final result is not the same.

It is a tradition in the Modenese families to give balsamic vinegar batteries to daughters when they marry, the more a woman has them, the more his dowry is precious.

For pure tasting, never use a metal spoon as it may alter the organoleptic characteristics. It is advisable to taste it with a ceramic spoon. The more conservative tasters, however, put a few drops of the collar between thumb and index because the heat of the skin exudes scents and flavors.

These are the interesting facts about original balsamic vinegar of Modena . To learn more anecdotes, come back to visit us.

Share
Previous The Summer Fancy Food: from Modena to New York
Next A new president for the Consortium: Mariangela Grosoli 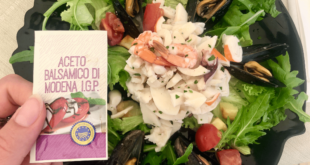